Announcement of Amazing Bomberman, distribution on August 5. Up to 4 online bomb battle developed according to the fashionable sound

Konami Digital Entertainment announced Amazing Bomberman on August 3. The compatible platform is Apple Arcade (iPhone/iPad/Mac/Apple TV) and will be distributed on August 5.

Amazing Bomberman is the latest work of the bomb action game Bomberman series. It will be a work that can enjoy a new world view colored by music and video. The game mode includes online battle, which can battle with up to four players around the world, Friend Battle where you can create a private battle by creating a room online, and a single battle for one person.

At the time of distribution, all seven types of stages are prepared, and each is played with different songs. It is said that there are songs written by domestic and overseas artists and have been written for this work. In this work, the battle time changes depending on the song, and even if the bomberman is blown away, it can be revived as many times as the song is flowing. Aiming to get more scores in one song.

The stage develops in the early, middle, and late stages in accordance with the excitement of the song, and the production of bomb installation and explosion sounds will change according to the tune. And when the song comes up, the block falls. If the block is broken with a bomb, items may come out. At the time of multiplayer, a spotlight is hit by the most score player. If you blow off the player with a bomb, you can get bonus points.

In addition, the player has a level element, and the level is improved by clearing the mission set for each level. The content of the mission seems to be online matches, installing specified bombs, and destroying the specified number of blocks. And when you clear the mission, you will get rewards such as customization items. You can make your own original bomberman. 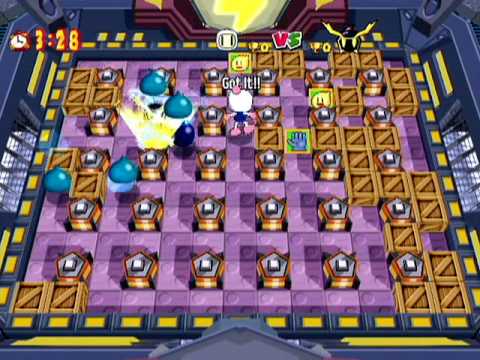 Amazing His Bomberman will be distributed on August 5 for Apple Arcade (iPhone / iPad / Mac / Apple TV).